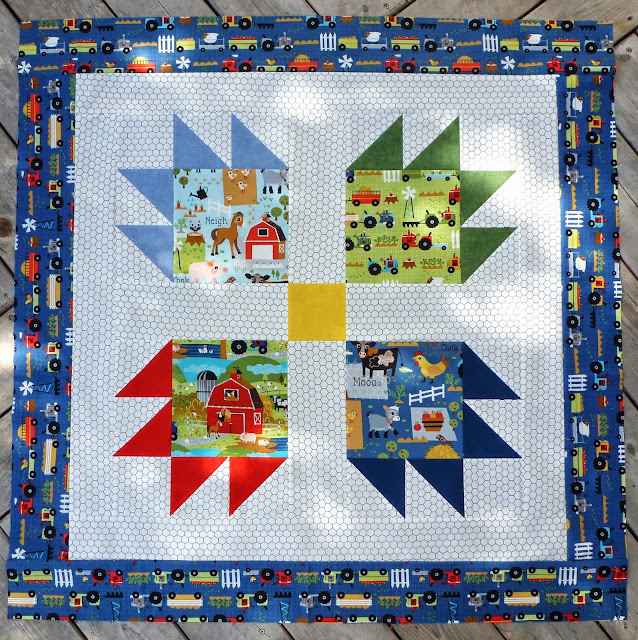 I might spend the rest of my quilting life trying to use up my oink-a-doodle-moo fabric. I started with 2 charm packs, 4 fat quarters and 2 selections of yardage. I made the one oink-a-doodle-moo quilt that ended up growing bigger than I had intended (you can see it here). It's now with the long-arm quilter. I only ended up using one of the charm packs and none of the 4 fat quarters, so I decided to make a bear paw quilt, which would nicely finish up the rest of my fabric. I've been admiring many of the bear paw quilts I've seen lately online.

I chose a pattern that had only just been made available as a free pdf and I got started. The bear paws came together nicely and I was happy … until I laid them out only to find that all my bear paws were going the same direction. Bugger. I hadn't taken into account my choice of directional fabrics and the pattern didn't mention it either. I would have to rip out 6 seams. Beginner error. 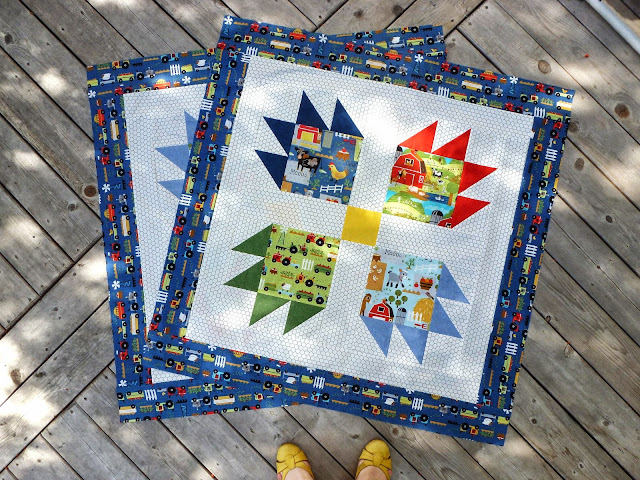 OR … I could NOT rip out those seams (I hate ripping seams) and I could just run to Periwinkle and buy enough fabric (since they happen to be carrying some of the line) to make enough bear paws for 4 quilts instead of one. Brilliant, right? Gosh, I'm an idiot. Pair that with the pattern having some errors in it, and I made a whole lot of extra work for myself. It would have been so much easier if I'd just ripped out those few seams. 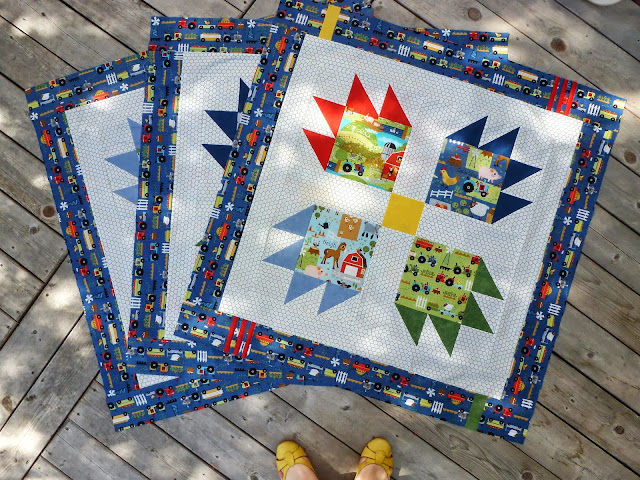 But look! Not 1 ... not 2 ... not 3 ... but 4 (COUNT 'EM ... FOUR) cute quilt tops! I really like the bear paws and I want to make them again but I won't recommend this pattern, that I used. It makes a really odd sized finished quilt. The finished top is exactly the same width as regular fabric width including selvage, so a pieced back is required unless you choose extra-wide fabric. If the quilt was just a 2 or 3 inches smaller, regular fabric could be used for the backing. I had wanted to use flannel because I thought it would be eaiser for me to machine quilt with but I would have had to piece the back. I pre-washed some flannel just in case but no way. I'm going to use Minky because it comes wide enough so that I won't have to piece and, besides, you can't go wrong with a Minky backing for a baby. The one time I tried machine quilting Minky, I really struggled. It looks like I'll be giving it another shot ... or four. I should be able to figure things out by the time I finish all of these. 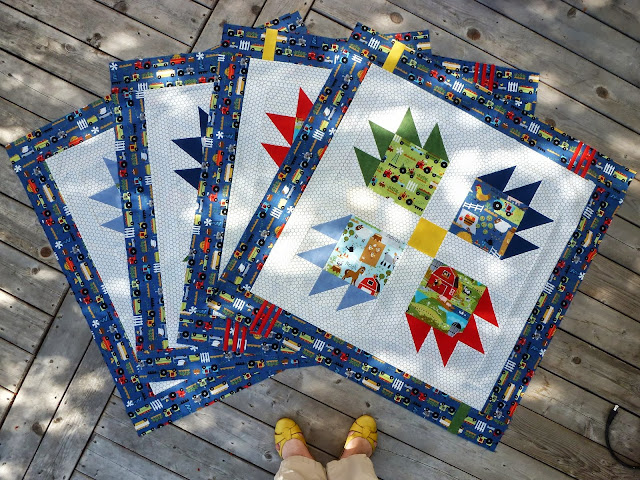 You might notice that on two of the quilts, the outside borders have some interesting little pieced bits added in. This is because the measurements were wrong in the pattern (I alerted the pattern designer by email but didn't get a response - hopefully she's corrected the pdf). After I spent a lot of time piecing the borders for two quilts with scrap bits, I found I didn't need to after all and so I didn't piece the other two. I'm not sure I'm such a fan of square quilts. I like the look of them but for functional purposes, I think rectangular ones are better. After all, people … most people … are proportionally rectangular, right?  So I'm going to call these quilts "play mats". I'm quite sure I'll love them when they're finished and I'm sure some babies will love them, too. By the way, the solid coloured claws are "quilter's linen". I had picked up a variety of fat quarters of the line when I was in Kentucky.

And, honest to God, I have enough Oink-a-Doodle-Moo fabric to make a bunch more quilts. How did that happen? Don't ask. But expect more in the future or maybe someone wants to make a trade? Anyone? Anyone? Buehler?

And this is why I didn't make much quilting progress this summer.  I had hoped to make great headway on a quilt for my daughter but I haven't even started. Maybe she'd like an oink-a-doodle-moo play mat instead. 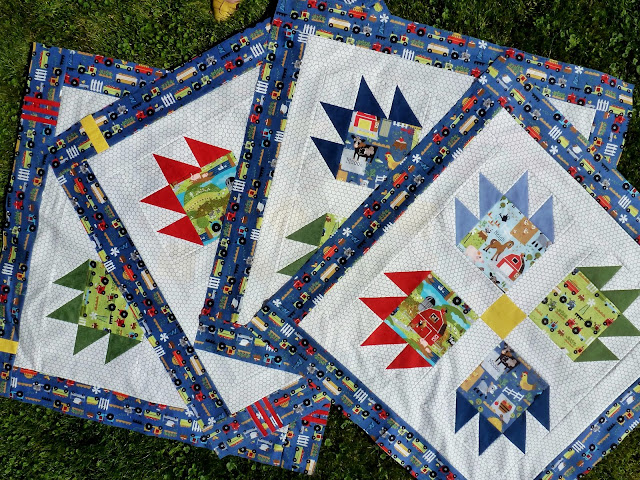 Heather Acton Saskatoon, Canada
I've wanted to make quilts for ... well ... decades! I was going to wait until I retired but after a recent cancer adventure, I've decided it's best not to wait to fulfill my destiny! I would love to make a quilt for everyone I love ... and then some!
To see my previous blog where I still post about breast cancer and health related issues, go to I'm Here. Might As Well Win!

Heather A
Breast cancer motivated me to start a blog, mostly to keep track of everything for myself but also to allow family and friends to keep up to date about my progress. My blog has evolved and so have I. Now, along with my continuous breast cancer experience, I also blog about my kitchen experiments, my return to quilting as therapy, and my return to full-time work. I didn't realize when I was diagnosed that breast cancer and the treatments would take so much out of me and that the effects would be so difficult and last so long. That said, I'm glad to be alive and now I need to leave a legacy. Time's a wasting. Must make quilts.